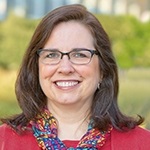 Melissa joined Vogel Financial Advisors as a financial planner in 2004 after seven years in the banking/credit union industry. In addition to retirement planning, Melissa’s areas of expertise include consumer and mortgage lending and college planning.

Melissa earned her Certified Financial Planner’s designation in 2001 and is a 1989 graduate of the University of North Texas.

Melissa has been an active member of the Dallas/Fort Worth Financial Planning Association since 1999, and has the honor of being recognized by D Magazine as one of "The Best Financial Planners in Dallas."

Outside of the office, Melissa and her husband spend most of their time in the car traveling to and attending their teenagers' activities. Their son, Aidan, is almost an Eagle Scout and plays the trumpet in several bands at school and church. Their daughter, Abby, trains year-round as a competitive gymnast. Both kids also sing in the choir at church and are active in the youth group.